One of the most affordable VPNs on the market

SmartyDNS is a VPN and Smart DNS service which is known for some pretty good features. It is also known for all kinds of giveaways that users can keep track of on their social media channels.

The service has been around for a while now, after seeing the launch in 2013. Its goal is to provide an affordable solution for those who suffer from problems such as censorship, geo-restrictions, and the general lack of security while browsing the web.

The service is under constant expansion, like most VPN services, as it aims to offer convenience and quality to its users. But, that still doesn’t guarantee that the service is actually good, or that it will suit your needs.

The only way to get that guarantee is to see what it has to offer, and assess whether or not that is good enough for you right now.

With that in mind, let’s take a look at what SmartyDNS has to offer. We will talk about:

Let’s start with the prices, as this is one of the features of this service that definitely stands out.

SmartyDNS offers its service at a very low, affordable rate. Especially when you compare it to some of the largest services in the industry, who tend to charge twice as much as this VPN.

Not only that, but SmartyDNS also keeps things simple, offering three different plans, all of which are pretty straightforward.

Depending on what you need, SmartyDNS has you covered. If you simply wish to test its VPN, you can go for the monthly plan. If you need it for a few months, such as in cases when you are traveling, there is a longer plan for that, as well.

Lastly, if you wish to just subscribe for a year, you can do that as well, and don’t have to think about it anymore for the following 12 months. Here is how each of the plans will cost you if you decide to go with SmartyDNS:

Interestingly enough, each plan also comes with a discount — longer plans have them by default, while even the 1-month plan gets it during the promotions and special occasions. So, that means that the prices you see here might change in the near future if there is a holiday approaching or some other major, relevant event.

Also, you should note that SmartyDNS also offers a 3-day-long free trial, which you can use to test the VPN, its speeds and performance, and alike. You will still have to create an account to use it and provide your payment method, although you won’t have to pay if you end up not liking it. 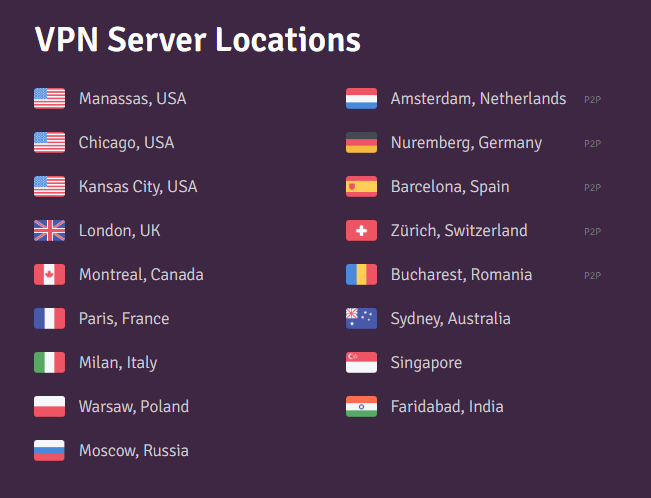 When it comes to servers, we will say right away that SmartyDNS doesn’t have that many of them. However, the ones that it does have are placed in some of the most popular locations around the world.

In other words, while there are only a handful of locations and actual servers, you are very likely to find one just where you need it to access the content that you may be interested in.

The servers are all high-speed, but that’s not all, as some of them are also special servers for P2P traffic. In other words, they can be used for safe and fast torrenting.

All of these are very P2P-friendly, so if you were looking for a good server to torrent, these are just the ones you will need.

From the privacy perspective, SmartyDNS is just as good as any other top VPN providers. That includes keeping no logs about their users’ browsing activity or connections, as well as offering high-security features. Some examples include a kill switch, multiple security protocols, DNS Leak Protection, and more.

SmartyDNS uses the strongest available encryption to protect your online traffic from anyone who might want to collect it and exploit it. This is known as 256-bit AES encryption, which is among the strongest in the industry, and it was never broken in the past. What this means is that your data is completely unreadable to anyone who might want to exploit it, so even if they do collect it somehow — they won’t know what they have.

However, it should be noted that the chances of this happening are extremely small, as SmartyDNS VPN has some of the best security protocols out there, including the best one in the industry — OpenVPN. These protocols should not leak your data, which is further secured thanks to the kill switch and DNS leak protection. 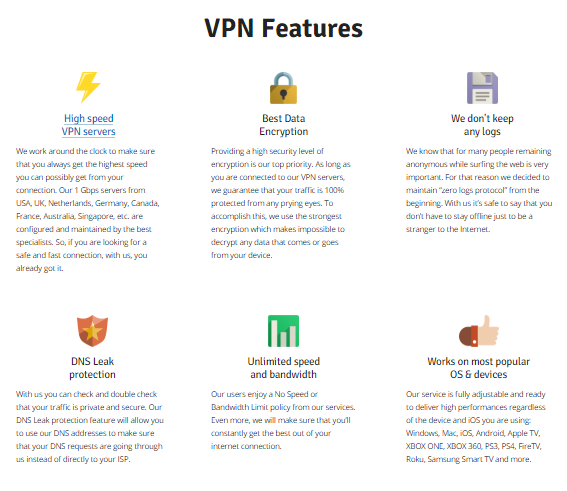 When it comes to features, SmartyDNS has quite a few of them that are of high-quality. Subscribing to this VPN service will provide you with things such as:

As mentioned, SmartyDNS VPN has very fast servers that are perfect for activities such as online streaming and even online gaming. According to its website, the service is working around the clock to ensure that its users will always have access to the best speeds. Not only that, but the servers are maintained and configured by specialists, which know all the tricks to make the servers as fast as they can be.

SmartyDNS has invested a lot into ensuring that your online activities will remain your own and that no one will monitor your activities. It made this possible due to top security protocols, including OpenVPN, L2TP/IPSec, IKEv2, PPTP, SSTP, and SoftEther.

It keeps no logs

Like all the best VPN services out there, SmartyDNS doesn’t keep user logs. That means that all of your online activities get deleted from its servers as soon as your VPN session ends. With SmartyDNS, you will not have to worry about the service misusing your data, or about anyone obtaining it from the VPN provider.

Another great thing about this VPN is that it offers 5 simultaneous connections per license. That means that you can install SmartyDNS VPN on as many devices as you want, and use 5 of them at the same time. This is not exactly something that has been standardized in the VPN industry, and most services can decide on their own how many simultaneous connections they allow. But, 5 is somewhere in the middle, not too few, and not too many, so all in all, it is a good deal.

SmartyDNS app is very easy to use by anyone, which makes it a great choice even if you are a first-time VPN user.

Some VPNs out there will put a cap on the speed or the amount of data that you are allowed to send and/or receive while using their app. Not SmartyDNS. This service lets you use as much bandwidth as you wish, and it won’t limit your own internet speed. 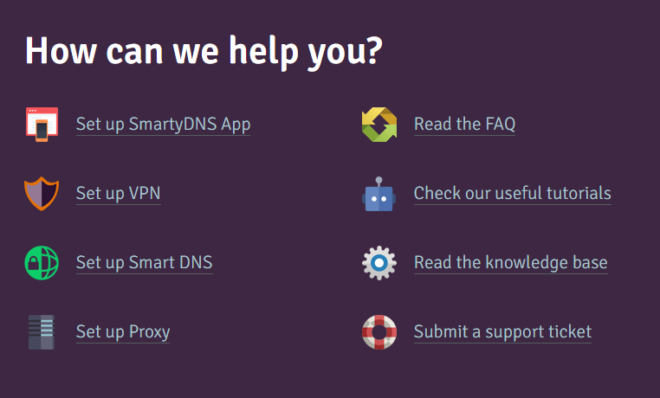 Customer support of SmartyDNS is also pretty decent. Whether you have a problem, or you simply wish to know more about something, there are several things you can do.

SmartyDNS has a very helpful and thorough FAQs on its website, which will likely be good enough to answer all the common questions that less experienced users might have. Try giving it a read when you have time so that you would know how to use the VPN, what it can do, and how to make it do it.

If, however, the tutorials and the FAQs don’t do the trick, you can always contact the customer service directly.

Customer service at SmartyDNS is always ready to help, and you can file a ticket at any point of day or night. The service is available 24/7 and we are confident that they will answer you as soon as possible.

Explain your issue in Live Chat

All good VPN services offer several ways to contact their customer support, and while SmartyDNS doesn’t offer a phone number that you can call, you can easily contact them via live chat and have any issue taken care of. Now, note that, they are only available for 16 hours per day during workdays, but they answer pretty quickly, and they are polite and professional, so you should have any issue sorted out pretty soon.

As all the best VPN services, SmartyDNS also features a nice, lengthy money-back guarantee that lasts for 30 days.

This means that you can test it for 30 days from the moment of purchase, and still get your money back if you find that the VPN doesn’t serve as advertised.

However, you won’t get your money back if you request it because:

Lastly, we should talk about compatibility. For a smaller VPN service, SmartyVPN is available on quite a few different devices and systems.

You can use it on:

While the list doesn’t seem particularly long, remember that pretty much any device which you can use to browse the web can run one of these two browsers. That means that you can just add SmartyDNS as an extension to the browser, and use it on all of these devices.

Meanwhile, if you use one of the mentioned systems, you will have a dedicated app, which will make using SmartyDNS VPN easy and enjoyable.

So, is SmartyDNS a good VPN? The answer is not as straightforward as we would like, but we believe that, in general, you won’t be disappointed.

The only thing that may be an issue for you is the size of the server network. If you are looking for thousands of servers in dozens of different countries, you may not find what you need here.

If not, however, you will experience great speeds, compatibility with most devices out there, and some pretty low prices. And, as mentioned, five of its servers were specially optimized to support P2P traffic, so you shouldn’t have problems even if you need a VPN service for safe torrenting. Meanwhile, most things you can do are covered in its vast knowledge base, so you will easily find tutorials and guides, while all common questions are answered in its FAQ.