ExpressVPN is a market leader, and it’s easy to see why.

VPN technology is offered by brands that do their business online. One of them is ExpressVPN, a top company when it comes to Internet security, privacy, and anonymity. This British Virgin Islands-based VPN service provider has few peers when it comes to offering a quality product and was recently named our number one pick for the best VPNs of the year.

One of ExpressVPN’s strongest points is its privacy. People can trust that their content will not leak over the web, as the company makes sure to prevent IP or DNS leaks from happening, not to mention that it implements a fully proven no-logging privacy policy.

Now, lots of VPN brands claim to offer a no-logging privacy policy, only to have a hidden clause that doesn’t guarantee full protection. A person should be able to trust its VPN provider, and people can sure put their trust in ExpressVPN.

ExpressVPN’s resolve was tested two years ago when Turkish authorities seized local ExpressVPN servers in an investigation of the murder of Russian ambassador Andrei Karlov. The company passed the test with honors, as they didn’t find any connection logs because they weren’t kept.

ExpressVPN is, by law, not obligated to hand over any data logs of its users even if it decided to keep them, because its jurisdiction, the British Virgin Islands, has no data retention regulations that can force the brand’s hands.

The protocols are the tools that help VPN brands perform content encryption, helping them build the “virtual tunnel” that has made the technology so famous around the world. Different types of work best depending on the circumstances.

Primarily, VPN protocols are defined as the processes and sets of instructions that companies and providers rely on to make sure customers enjoy stable, secure VPN client-VPN server communications. It is the balance of transmission protocols and encryption standards.

ExpressVPN offers one of a complete set of protocols in the industry. It provides its users with the chance of using the OpenVPN protocol, which is the best combination of speed and security available in the encryption field. In fact, it has both versions of OpenVPN: TCP and UDP.

The brand also offers other protocols, such as L2TP/IPsec, IKEv2, IPSec, and PPTP, which is the original Peer to Peer Tunneling Protocol that gave life to the VPN technology. It is now considered old and outdated.

ExpressVPN is one of the highest-priced VPN options in the industry, with a monthly service that costs $12.95. Few brands charge a higher fee, but ExpressVPN’s features, broad server network, and overall effectiveness make it a worthwhile investment.

Paying six months upfront would lower the monthly equivalent to $9.99, as the total payment would be $59.95, made twice a year. There is a better discount if the users pay for the full year: the amount would be $99.95, which would be 35 percent off the original price and a prorated monthly price of $8.32. 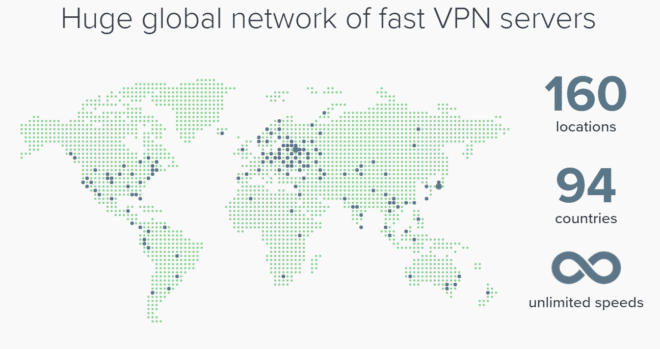 The company can’t quite match the 5,000 servers that some of its top competitors offer. However, it does more than OK itself, with over 3,000 servers spread around 160 total cities and 94 countries.

Every continent is covered, mainly the Americas and Europe. However, few VPN providers offer so many countries available for connection in Asia and Africa, not to mention a fully functioning server in Hong Kong.

The nations in which ExpressVPN has servers are:

ExpressVPN has excellent speeds across its network, with stable performance in most cases. On average, the brand only decreases an Internet connection by between 15 and 20 percent, which is an amazing number considering that the vast majority of brands have lower rates and that VPN technology itself will slightly slow down users’ connections.

Users all around the world recommend using ExpressVPN for nearly all of the Internet-related activities, including regular browsing, gaming, torrenting, online banking, social media, and streaming; because of the service, thanks to its infrastructure and quality, will mostly maintain the baseline connection.

High-speed servers: ExpressVPN guarantees some of the best rates in the industry, suitable for all web activities. People will be able to torrent, stream content, and play games online without dreaded buffering or lag.

Full P2P and torrent compatibility: While other VPN companies tend to discourage torrenting and the exchange of P2P (Peer to Peer) files, ExpressVPN embraces the activity, even offering some optimized servers. Considering, also, the strict no-logging privacy policy and top-notch encryption, you can be sure that no copyright trolls will be after your identity.

Split tunneling: Thanks to this feature, users will be able to choose which traffic goes through the virtual “tunnel” and which one remains unprotected, or unencrypted.

Unlimited speeds: While some VPN companies limit or throttle the maximum speed available for users, you will have no such concerns if you use the ExpressVPN app.

Unlimited bandwidth: There are no data caps associated with the use of ExpressVPN: if you pay for a subscription, you will be able to implement the company’s encryption with no limitations.

Extensive server network: ExpressVPN offers more than 3,000 servers in 160 cities around the world, spread around 94 countries. The United States of America is the nation with the highest number of servers.

Live chat feature: While ExpressVPN has other channels of customer support, such as a ticket system and a vast knowledge base, its calling card remains the live chat service. Its responses are quick and helpful, timely enough to get you out of trouble if need be.

Speed Test: The Internet provides several tools to measure the rates of your VPN provider. But ExpressVPN has a built-in speed test feature that will help customers choose the fastest servers anytime, anywhere.

Zero-knowledge DNS: You won’t have to use encrypted DNS of third parties, because ExpressVPN has its own Zero-Knowledge DNS, letting people run its private DNS on every server.

Full Netflix compatibility: ExpressVPN is a streamer’s delight: not only it offers content of 94 nations and impressive speeds, but also, it allows customers to connect to several Netflix regions without much hassle, including the American one.

Three simultaneous connections: You can set up the ExpressVPN encryption in three different devices at the same time under a single account, which is highly convenient if you own, for instance, a smartphone, a laptop, and a tablet.

30-day money-back guarantee: You can ask ExpressVPN to give your money back if, after a full month of use, you are not satisfied with its service.

ExpressVPN has a complete set of tools and resources available to help clients and subscribers in times of need: its customer service is top-notch, widely recognized as one of the absolute best in the industry.

The presence of a live chat feature is the most notable development, offering an instant communication channel with one of the company’s support agents. The answers are well-thought and thoroughly helpful.

However, we recommend checking out the website for help first, as it includes all the guides, manuals, video tutorials, and instructives that will help you understand how to install the service in all devices and platforms, not to mention a Frequently Asked Questions (FAQ) section. There is also a ticket email support if you are a more traditional person.

Set up Process and Ease of Use

ExpressVPN is easy to install and set up. You can find it on the Google Play Store or the App Store, on you can download it by going to the company’s website, www.expressvpn.com, and pressing the red button that says “Get Started.” There, you will see the plans, prices, and payment methods.

The apps and clients are simple, yet very intuitive. They are generally easy to use, with a slick design and a friendly interface that won’t interfere with your sessions and intentions in any way.

The website is very amicable to browsing and searching for information. There are tons of useful links and valuable information, guides about how to install specific products in all devices and platforms, and other support tools, such as the live chat service.

You can install ExpressVPN in pretty much every online-powered device. The service is highly compatible and has native apps for Android, iOS, Windows, MacOS, and even Linux.

You can install ExpressVPN on three different devices at the same time. Router compatibility includes DD-WRT and Tomato.

In conclusion, if you are looking for a reliable all-around VPN that guarantees robust content encryption, full privacy protection, excellent speeds, and a vast server network that covers most of the commonly used locations, then ExpressVPN will be worth the considerable investment.

At $12.95 per month, ExpressVPN is what you may consider expensive. And with three simultaneous connections at a time in which almost any top brand in the industry has at least five, there is room for improvement. But make no mistake: when people are considering one of the elite companies in the content encryption field, ExpressVPN’s name is always on the list.