A reliable and affordable VPN

Have you heard of Ivacy before? There are many other VPN providers today that are advertised far more prominently online. Yet the truth is that Ivacy has been in the industry for quite some time. Not a lot of people know this, but it was Ivacy that pioneered split tunneling — a feature now standard among VPNs.

Thus, it would be unwise to disregard Ivacy. This is a VPN company that knows what needs improvement. Since 2007, it has invested a ton of time and effort into realizing genuine internet freedom and security for its hopeful users. And with each passing year, it seems that Ivacy is getting closer to this goal.

This year, the ProPrivacy Awards gave Ivacy three awards: runner-up for best overall, runner-up for the best value, and best in speed. Simply put, it’s recognized as the fastest VPN provider of 2020. This is a big selling point, especially for people looking to download files and stream content as fast as possible.

But how significant is this speed advantage for the average user? Are its features numerous and good enough for you to pay for a subscription? Find out below in our comprehensive review of the Ivacy VPN. 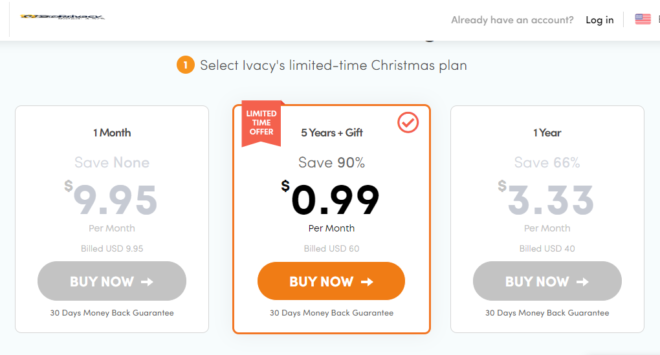 There are three subscription plans: monthly, annual, and biennial. If you choose the monthly plan, you’ll pay $9.95 monthly. This is considered the regular cost of using Ivacy. You’re paying the full price. Thus, this is only practical if you’re testing the VPN and you don’t want to commit to more than a few months.

If you intend to use Ivacy for far longer, go for at least an annual plan. Even if you don’t use the VPN for an entire year, you’ll be paying less than if you stuck with the monthly plan. If you pay monthly for six months, it will cost you $59.7. With the annual plan, you’re paying just $40 for an entire year.

However, the most affordable long-term option is the biennial plan. With this subscription, you only have to shell out $54 every two years. Compared to the monthly plan, you get a total discount of 77 percent. Each month costs just $2.25, which is cheaper than even the annual plan that amounts to $3.33 monthly.

The three aforementioned subscription plans are available at any time of the year. But there are occasions when Ivacy offers even better deals. For example, Ivacy has a holiday offer: $60 for five years. That puts the monthly cost at $0.99 — 90 percent lower than the regular monthly plan.

If that wasn’t amazing enough, this limited offer also includes another subscription. You’ll get a one-year premium subscription to Sticky Password. This is a password manager similar to LastPass and 1Password. Thus, we suggest waiting for deals like these if you want the absolute best bang for your buck.

Regardless of which plan you pick, you can also avail of two add-ons: dedicated IP and port forwarding. Both add-ons are meant to bolster user security. As its name implies, the first feature allows you to have a dedicated IP address. It costs $1 a month. With it, you can go to IP-restricted networks without a hitch.

Likewise, port forwarding will allow you to access your computer or server no matter your location — as long as you have an Internet connection. You can choose among seven locations for the same price of $1.99 a month: United States, Singapore, Hong Kong, Germany, Canada, United Kingdom, and Australia.

One of the best things about Ivacy is how easy it is to pay. Currently, there are seven payment methods available: credit card, PayPal, BitPay, Alipay, Perfect Money, Paymentwall, and cryptocurrency. The sheer number of options points to the company’s continued efforts toward user convenience.

Despite these payment options, they won’t matter if your account details are compromised. To ensure users that they can pay with confidence, Ivacy has the Comodo Secure Seal. This small yet significant stamp is proof that the cybersecurity company Comodo has examined the Ivacy website for its safety.

Ivacy has no scarcity in neither servers nor locations. You can choose among over 100 locations around the world. Also, Ivacy has more than 1,000 servers. They have the hardware to accommodate all active users. They’re prepared for upscaling, especially since they already had 2 million users back in 2015.

However, you should note that the allocation of servers isn’t equal. There are regions with more servers than others. For example, Europe has 159 servers while Oceania has 25. Still, the placement of servers isn’t done at random. These are more indicative of users’ server location preference and total demand.

Also, there are countries with servers available in more than just one city. Australia has VPN servers in both Melbourne and Brisbane. Similarly, Canada has servers in Quebec City and Vancouver. Moreover, the US has many servers located in places such as San Francisco, Florida, Atlanta, and Phoenix.

Here’s a list of the server regions and the countries you can connect to:

One of the worst things about the Internet is that companies sell and trade customer data — all without your permission. Sure, some ISPs and companies don’t sell big data to third parties. Likewise, some are blunt about their practices to their users. But some don’t inform their users.

With Ivacy VPN and its No Browsing Logs Policy, you don’t have to worry. The company won’t keep any logs whatsoever. Plus, the VPN stops websites, ISPs, and other entities from tracking your online habits.

There are times when you will lose the VPN connection without notice. And what’s worse is when you continue browsing online without knowing about it. But with the Internet Kill Switch, you don’t have to do anything. Once you lose your VPN connection, the feature stops all your online activities.

Smart Purpose Selection: With this, Ivacy can determine the main purpose of the VPN connection. It will check if you’re using the service for a secure download, for streaming, or for unblocking access to a site or any content.

IP Address Masking: There are occasions when ISPs try to slow down a user’s bandwidth. Ivacy VPN hides your IP address, which prevents these companies from messing with your internet connection.

IPv6 Leak Protection: The IPv6 is considered as the standard internet protocol. However, it isn’t designed to stop third parties from keeping track of your online habits. Also, IPv6 may expose your IP address. The Ivacy VPN stops that from happening.

5 Multi Logins: It’s okay if you have multiple devices — Ivacy is good for five devices. For example, you can use Ivacy on your iPhone, Android TV, PS4, and two other devices at the same time. You don’t need to log out of one device just so you can use the VPN service with another.

Malware Detection: Ivacy does everything it can to uphold user safety in the digital realm. When you’re downloading a file, the app automatically scans it. Ivacy will then remove any detected malware or virus.

Ivacy VPN offers four protocols: TCP, UDP, L2TP, and IKEV. Rather than allowing just a single protocol, the company gives users a choice. While UDP offers more security than TCP, some users may prefer the latter’s reliability. Likewise, you can pick between L2TP and IKEV whenever you want.

Furthermore, the service can provide 256-bit encryption if you want high-level cybersecurity. As its name implies, it is superior to both 128-bit and 192-bit encryption. Plus, this is what military, financial, and government organizations usually use for confidential data.

If you have any problems or questions about the service, the Ivacy website has a 24/7 live chat feature. The chat pops up as soon as you load the website. But other than live chat, you can contact the support team through email or by submitting a ticket.

Likewise, there are other options to solve the issues you have with the app. There’s a comprehensive support center filled with guides and articles — and this goes for all the compatible devices and apps. Thus, you can just type into the search bar and see if your issue was already remedied before.

It’s difficult to find a reliable VPN provider worth investing in. Thus, it’s understandable why potential users check refund details before they pay. If you paid for an Ivacy plan and you want to back out, you can get a full refund as long as you do it within 30 days of the date of purchase.

As we’ve mentioned before, Ivacy was regarded as the fastest VPN for 2019 by ProPrivacy.com. But can a regular user feel the difference compared to other VPN providers? While the difference isn’t that drastic, we can vouch for the seamless online experience.

Unlike other VPN providers that noticeably lower your connection speed, Ivacy has no significant effect on bandwidth. Plus, Ivacy VPN effectively stops ISPs from throttling your bandwidth in the first place. Thus, you get to consistently enjoy high download speeds and buffer-free video streaming.

Ivacy VPN is available to Windows, Mac, and Linux OS users. Likewise, people with iOS or Android smartphones or tablets can use the service. But Ivacy isn’t just for desktop, laptop, and mobile users. It has browser extensions for both Chrome and Firefox.

If you have an Android TV, Kodi, or the Amazon Fire Stick, you can use Ivacy VPN on them. It should help you stream content on your TV as safely as possible. It could even help you access geo-restricted content from platforms like Netflix, Hulu, and Amazon Prime Video.

Likewise, Ivacy works on consoles such as Xbox, PS3, and PS4. Microsoft just introduced the new Xbox Series X next-gen console earlier in December 2020. And Sony is already developing the successor to its PS4. Thus, we hope that Ivacy VPN offers support to those new consoles as well.

Ivacy is an intriguing VPN provider for many reasons. For one, it’s responsible for the essential feature that is split tunneling. Even other VPN companies wouldn’t be the same without this technology. Second, the company has consistently upheld its values of online freedom and “impenetrable security” for users.

With such lofty goals, it’s commendable to see how much Ivacy has achieved. The pricing options were made with each type of user in mind. The monthly is indeed costly, but there’s also a 30-day money-back guarantee. The other two plans are affordable, and there’s even the occasional limited edition offer.

Yet despite the attainable pricing options, Ivacy never compromised on its core functions. Users get to choose among multiple protocols. Likewise, the degree of device compatibility is staggering. Ivacy might be the fastest VPN service of 2020, but it also offers users so much more than speed — and that’s great.