Keenow Unblocker Review - Is It Good For You?

Keenow Unblocker is an Israeli-based service provider whose main target is the online streaming community. The VPN offers a two in one service – a VPN and Smart DNS. However, unlike most VPNs, Keenow doesn’t really focus on privacy and security, but rather on its streaming capabilities. The developers, Keen Media Group, say that the VPN was established with a vision to “end online censorship.”

In this Keenow review, we’ll look at the VPN and unblocker more closely to help you divide whether it’s the right product for you.

All Keenow plans offer the same features, and so the difference only comes in at the subscription period. The monthly plan goes for $9.95 a month. This means that the VPN is averagely priced, and you can also save more with a longer-term plan.

Keenow had Keenow Lite Plan, which offered free Smart DNS service to users around the world. The plan was however discontinued in August 2019 owing to the improved geofencing protection used by streaming services nowadays.

Keenow allows payments via credit/ debit card, PayPal, and Bitcoin. Bitcoin support is a good option for users who would like to maintain their anonymity when making payments, although Keenow may not be the VPN for privacy-oriented users.

Keenow VPN lets you try out their service risk-free through a 30-day money-back guarantee. This lets you cancel the service and get all your money back. Keenow promises that its a no-questions-asked process.

Keenow VPN doesn’t boast as many servers as other VPNs. The VPN’s server network consists of 40+ servers located in 30 countries. These servers, though few, are well distributed across the world to ensure that there’s a server in every region.

The countries with servers include:

For those who wish to torrent, P2P traffic is supported on New York and Netherlands servers. This is clearly indicated in the server list.

Keenow VPN is based in Israel. The country has been known to be a keen observer for the Five Eyes mass surveillance initiative, although it’s not listed as a party in the intelligence group. They only keep connection timestamp and data transfer logs.

As for security, Keenow VPN uses AES 256-bit encryption, which is the ideal standard.

“We provide a few different sets of configurations on different ports. The most secure one currently running is with cipher AES-256-CBC and auth SHA512 for HMAC (message authentication), while the DH key size is 4096bits. As of PFS, key renegotiation happens once per hour as default for OpenVPN.”

Despite majoring on unblocking content, Keenow Unblocker uses high standards of security, which would be sufficient in any VPN.

On top of that, there’s a kill switch feature that can be enabled under “Advanced Settings.” The VPN also protects users from leaks through DNS & IPv6 leak protection features, which are enabled by default.

This is Keenow VPN’s key selling point. If you are not familiar with the technology, Smart DNS is basically customized DNS service, which resolves domains of streaming sites to a proxy server located in the US. This makes it possible to access the streaming service as if you are in the US, without even having to use a VPN or change your public IP address.

The biggest advantage of using Smart DNS over a VPN to unblock streaming services such as Netflix is that Smart DNS does not encrypt your traffic, which means that it doesn’t affect streaming speeds. With Keenow Unblocker, you can stream without having to compromise your speeds at all!

Until recently, Keenow Smart DNS was available within the VPN app, and you would only need to toggle a button. That functionality has however been removed, and now you can only set up the DNS manually.

Keenow’s virtual router is a unique and welcome addition. This is a feature within the VPN’s app for Windows 7, and it’s used to share the PC’s connection as an encrypted wireless network. This allows you to secure and unblock content on devices that do not support VPN installation.

Keenow Unblocker allows torrenting on their network, which is a use plus among torrent lovers (and especially considering it focuses on streaming). However, there are only two torrenting servers, one located in the US and another in the Netherlands.

Keenow VPN has an inbuilt kill switch feature that secures users from accidental exposure. It does this by disconnecting all internet access whenever the VPN connection drops. This may happen while switching servers or when the VPN disconnects for whatever reason.

Keenow VPN’s kill switch is disabled by default, but you can switch it on under “Advanced settings.”

These are important features that ensure that when you are connected to the VPN, your DNS requests are not accidentally exposed to your ISP and that your IPv6 address is not visible to the sites you access. This is important because sometimes your DNS requests may be forced back to the ISP, especially if you use a Windows computer. VPNs also don’t use IPv6 addresses, and so if your ISP provides one, IPv6 traffic will need to be blocked.

Most VPNs limit simultaneous connection to 5 per account. Keenow gives you the freedom to connect as many devices as you’d like, and so you can use it with your whole family.

Since the unblocker has Smart DNS, you can also unblock content on any device that does not support VPN installation. The Smart DNS is, however, not recommended for mobile devices as Netflix uses hard-coded DNS on mobile apps.

Signing up to Keenow is quite straightforward, and the VPN apps easy to use. The desktop app is quite simple, and you can connect with just a single click.
You can easily customize the connection by opening Menu on the top left side, then choosing Advanced Settings. 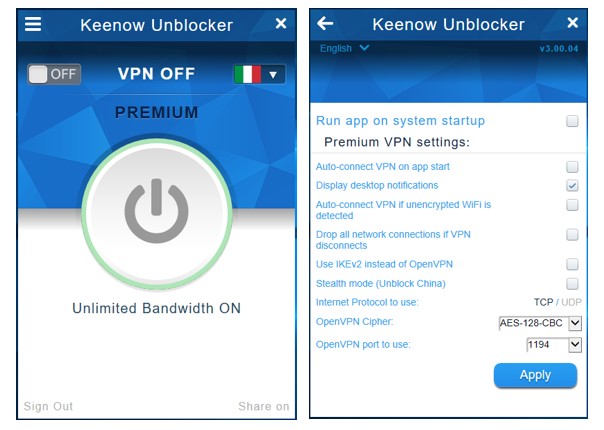 To choose a server, you just need to click the selection icon on the top left side then click on the country or server you’d like. 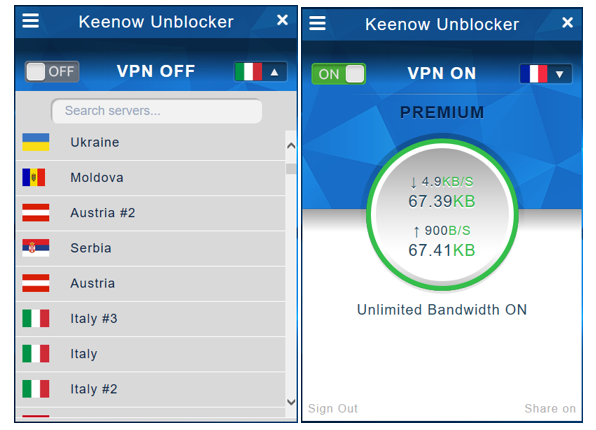 The smartphones apps feature the same interface and are just as easy to use.

While doing our tests for this Keenow Unblocker review, we didn’t experience any issue, and the various features worked extremely well.

After setting it up, we were able to access Netflix as well as other services such as Hulu, HBO Now, Disney Plus, and many more.

In terms of speed, we were surprised to notice that Keenow Unblocker is quite fast, despite its small server size. To give you an overview of the speeds, we conducted several speed tests.

The first speed test was conducted without a VPN connection, and it’s meant to give us the base connection.

We then connected to a nearby server (same country)

After that, we did several tests with distant servers, and below is the average.

Keenow fares well with its speed and performance. It can be compared to the other known VPNs, it is actually better than some of VPNs. It offers some decent speeds with only minimal speed degradation.

Note: Keenow Unblocker offers several protocols from which you can choose between. The default protocol is OpenVPN AES-128-GCM, which is responsible for the decent speeds we got.

The fact that Keenow doesn’t have live chat support in this day and age is disappointing. The VPN, however, has detailed guides that show how to set up the unblocker on any device. There’s also a comprehensive FAQ section that answers commonly asked questions. Overall, we can describe Keenow’s support as satisfactory.

Keenow Unblocker is quite good at what it does as it lets you restore internet freedom. Once you get an account, you can effortlessly unblock Netflix and other blocked services that use geo-restrictions or have been blocked by your ISP. However, note that the VPN is just additional as the main product is the Smart DNS. If you are looking for the privacy offered by a VPN, you may need to look elsewhere.